The parting of the surfaces

The first model was an education again. It took a few goes but I got there. The next model failed again. Time for some lessons learned.

The soldier came out quite well. There was some delamination in the support material (cracks in the plastic where one layer lifted off the last), but it was sacrificial anyway. There was also a little delamination in the model itself, but overall the results were quite impressive. Unfortunately I broke his feet off as I was removing the support material. 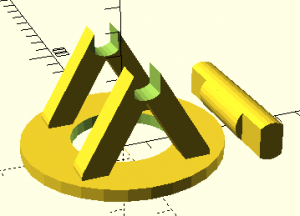 The next model I am trying is a custom perch that will fit on our scales. Budgies are stoic creatures and if they don’t feel well they will not let on. Often the first clue is weight loss so it is important to weigh him regularly. 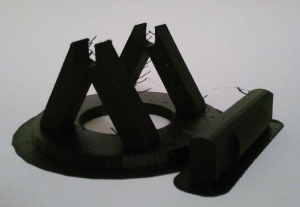 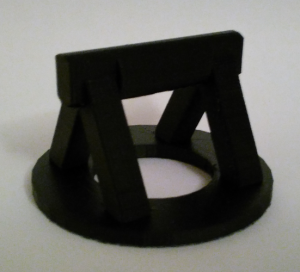 The reprint with the disabled fan worked well. You can see some random threads attached to the model, which weirdly were all pointing at the arriving print head. They were easily brushed off at the same time as clipping the model free of its base.

The first lesson from this model is the printer doesn’t handle sharp edges well. The design has razor sharp lines at the top of the base, but the printer can’t do that kind of resolution so things went a little blobby. Next time I’d trim them flat to ensure a clean print.

The next lesson is that I used an intersection with the bar to cut the notch in the stand. Mathematically perfect in the computer, but the printer is not so precise. A little brute force on what is a fairly brittle material led to a little cracking. Nothing serious, but next time I’ll cut a tiny bit of slack in the notch. Better to glue it than find it doesn’t fit together.

With a little coaxing, Skittles did step onto it. He weights 55 grams, which is well within happy levels. The perch itself only weights 20 grams though so he is well able to fling it on take off. Also, the saw horse design means I can’t get him to step up onto it. The next design should be taller and have a significant overhang to allow my hand to get under the bar.

Github link as usual. Linking to a specific version this time so I don’t need to update the post if I update the model.

This entry was posted in 3D print, build. Bookmark the permalink.