A colleague has asked me to print some parts for a game he plays. It seems they are available on Thingiverse so getting the model was easy. Let’s have another crack at calibration and printing. 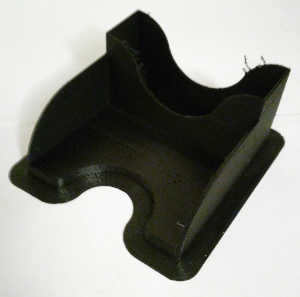 First of all: Let’s take a look at the model. It certainly looks simple enough. No overhangs. No fine detail. The footprint is also around the size of the budgie scale so I’m confident I can pull this off.

The first attempt bears this idea out as a test print was run off and presented for approval. Learning some lessons from tearing the feet off the roman soldier, this time I left the skirt and even the stray threads of plastic in place. If anyone was going to break this, it was going to be the new owner. 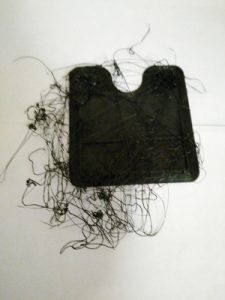 It was judged to be perfect and the full order was committed to. The second print was not so successful. I checked on the work after an hour to find the printer had taken offence at the model and thrown the model on the floor and was now printing what could be charitably be described as a dust bunny.

Honestly I’m not sure how it happened. So far the prints have either gone wrong before completing the base or they’ve gone brilliantly.

I re-calibrated the print bed again and set if off again for a third go. This time it worked fine again. The only reasonable explanation I can see is the ambient temperature in the room may have been lower during the second print because it was later at night. I am starting to understand why higher end printers are enclosed to control the environment more precisely.

I am noticing a build up of glue on the print bed now, which I’m going to have to look into removing. I’m working on the theory that small children have been enthusiastically applying Pritt Stick to everything in the house for generations, so pulling it off of sheet metal is not going to be a problem.

The question of how much it costs to run a 3D printer has also been raised. A quick search came up with someone breaking down the costs. I had assumed that the plastic cost would be negligible but the electricity would be more significant. The extruder gets very hot but it’s also tiny. I was more concerned about the print bed at nearly boiling point for four hours. It turns out it is likely to be the other way around. Each print weighs 21 grams and the kilo of filament I bought cost £20, giving me a plastic cost of ~£3 and an electricity cost of around four pence for all five models.

This entry was posted in Uncategorized. Bookmark the permalink.