Propping up the barre

My better half enjoys ballet and has some space in the house to practice. All she needs is a little bit of floor space but all she has as a stand in for a barre is a windowsill.

On the other hand, I have a membership at a tool library and a credit card for ordering supplies. Maybe we can do something better. 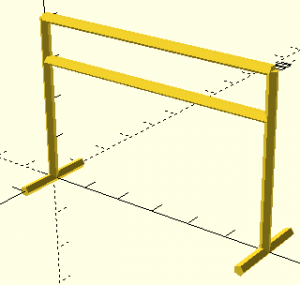 Selection of materials is the first question. The portable barre in class has a wooden rail and metal legs. Two inch dowel would be easy enough, but metal legs imply welding. The local hacklab has does have a tig welder, but that requires training. Maybe next time.

Eventually I found a selection of plumbing supplies. Amazon has 5ft lengths of pipe, which seems like a sensible size but the connectors they have in that size are wildly expensive. Fortunately standard components means I can shop around and I found a site selling compatible connectors. Really I would have bought everything from there, but they only sold pipe in 1m or 3m lengths, neither of which suited my purpose. Plastic is not going to be as sturdy as metal, so an extra cross bar was added, both to give options for use and to provide extra strength.

Two 5ft lengths of pipe will form the bars. One other will be cut in half to provide most of the leg length. The last will be cut into ten inch segments to provide four supports and two spacers between the horizontal bars. This puts the low bar at ~30 inches high and the high bar at ~40 inches high.

Measure twice, cut once says I should measure everything before I start. All of the joints were tested on the end of one of the pipes to ensure I hadn’t been given any wrong parts. Each of the pipes was also measured for length. They were within a eighth of an inch and conveniently two were identical lengths. These were picked to be the horizontal bars.

At the tool library I was given a quick orientation with the chop saw and cut the remaining pipe into the proper lengths. One went into half to form the long supports. The others into six ~10″ lengths to form the short supports and the feet. 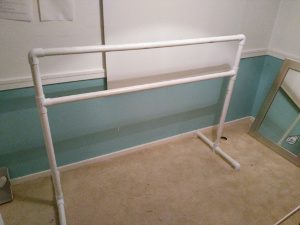 The parts were carted home and the barre was built, much to the delight of my wife. At the moment, everything is press fit. The components I bought are exact enough that it is entirely capable of holding itself together, even with its whole weight hanging off the top bar.

It’s going to need some adjustment. It’s a little too tall and it could stand to be more stable. Height can easily be removed from the long legs and I’ll investigate a PVC weld to make the structure stronger. I’ll also need to check over the feet as there are six points of contact with the floor. They are all going to need to be perfect if it’s not going to wobble in use.

This entry was posted in build, dance. Bookmark the permalink.