Would you care to see the menu?

I can still see two problems with the game. One obvious, one not so much. They both come from the same place though: What happens when you open the game up? It depends what else you have been up to. You might get a new game if it’s been a little while and the process manager has decided to evict the game process in favour of something more important, or you might get the results of the last game played. Depending on circumstances, we might want either of these situations but whichever one we want, we definitely don’t want to leave it to chance.

Today we are going to deal with getting to a new game. If the app hasn’t been run, or if it’s been terminated since the last game we have no problem because the user will be dropped into a brand new game, ready to go. If the the process was still runnning since the last game then we could just hold down the back button and rewind the game to the start but that’s really untidy. What we are going to do is grab the Menu button and make it work for us.

I want the menu button to bring up the standard Android menu with a “New Game” option. When I press that, I want a sub-menu that shows me my new game layout options. It has been pointed out that completely random starting positions could end up being wildly unfair so I want to be able to choose between fully random and random-but-reflected. The first thing we are going to need to do is add a function to clear the board to the Board view.

Easy. We can already populate the board, and now we can clear the board we can fill it up in all manner of creative ways as soon as we have the menu available. We can either build the menu programatically, or we can use XML and a menu inflater. We’ll start with setting up the menu programatically before re-doing it in XML. The first task is to override the Activity function that gets called when the menu button is pressed.

We have a menu which shows a submenu when you click on it, but nothing important happens. Now we have to override the Activity function that is called when we click a menu.

The game type flags we used as ids in our menu setup turn up again as the item id of the menu object passed to onOptionsItemSelected() from where we can do whatever activity our menu is supposed to achieve. Pull out the useless Toast call and we could be done, but I’m going to yank all that code and rebuild using XML to create the menu.

If you need to, create a “menu” folder in the res folder in our project. In there create a new file called menu.xml containing the following XML.

This layout will give us the same menu structure as we built previously and create resource ids to replace the game type flags, but we need to turn that into a menu with a MenuInflater. Scrap the game type flags and onCreateOptionsMenu code we set up above and replace it with the following.

The MenuInflater will covert our XML above into a menu just like we used to have. The only diffence with our menu event handler is that the menu id will change.

As you can see, this bit is exactly the same as before except the case statement uses R.id items instead of integers. I’m leaving the reflectedSetup() function as an exercise to the reader. Every time we challenge a new person now we are two clicks away from a fresh game. 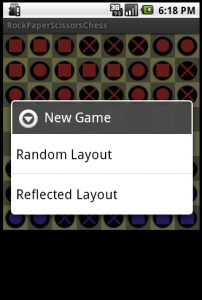 This entry was posted in android and tagged RPS Chess. Bookmark the permalink.

5 Responses to Would you care to see the menu?